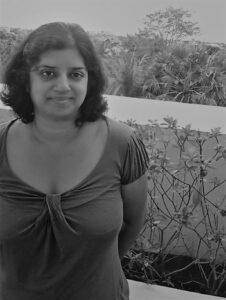 Anita Goveas is British-Asian, London-based, and fueled by strong coffee and paneer jalfrezi. She’s on the editorial team at Flashback Fiction, an editor at Mythic Picnic’s Twitter zine, and tweets erratically @coffeeandpaneer. Her debut flash collection ‘Families and other natural diasters’ is available from Reflex Press, and links to her stories are at https://coffeeandpaneer.wordpress.com

Anita's story, The Correct Thickness of Onions, appeared in Issue 2 of REWRITE READS.